Chahar Barg or Passour is a card game that has its roots in the Middle East and is widely played in Iran. This game is known as Haft Khaj, Eleven, Seven and Four.

A few tips about the game:

– The four-card game, like other passer games such as verdict, shalam, seven bad (or seven dirty), rim, etc., is done with a card (playing card).

– This game is for entertainment only and has no other use.

Rules of the game

1- Due to the shortening of the games, 64 points are not considered and the player who has collected more points at the end of each hand will win.
2- In case of a draw, a player with seven hajjs will win.
3- In the end, sur is not considered.
4- Players have 45 seconds to play in each turn (in online games) and if they do not play in the mentioned time, they will lose.
5- Players who leave the game before the end are fined and must play one offline hand for each penalty.
6- Do not put rude names separately, erroneous subscriptions will be blocked by the database. 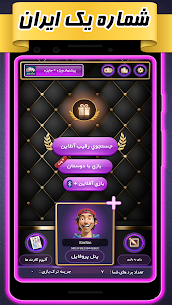