[SP Chara | Chrono Traveler]
She does not belong to the past, nor is she from the future. I'm just an odd tourist.
"Nice to meet you, you can call me 'Manager'."
New SP Character "Chrono Traveler" Appears!
A machine-type fire character. On the battlefield, he freely uses his chakram to slash enemies to pieces. In addition, after activating a special move, you can enhance all damage dealt by all team members.

[Theme Event丨Collapsing Rescue Diary]
When you log in as usual, the game in front of you is already completely changed. The only person you can trust is a mysterious person named "Mr. Manager"…
——Don't be nervous, it's not that serious.
By participating in the event, you can get rewards such as the special costume “Enchanted Night Crow”, crystals, Chronos Traveler fragments, etc.

[Event 丨Hidden Treasure/Ringing Thunder]
If you complete the specified event mission, you can get a character card of “Thunder Lawrer”.

[New story in the name of truth]
"However, as a ruler of reason, Bronya has no regrets. After all… 'Humanity's truth will always change'. This is the only unchanging 'Truth' of mankind."
Chapter 33 of the main story has been updated, the new area "Crater of Demise" has been opened, and the new contents "Relics of the Old World" and "Steel Shadow" have been implemented. If you participate in the event, you can get rewards such as crystals and "Stigmata Selection Box".

[New Event 丨Cabbage Hide and Seek]
If you complete the event mission, you will receive a “mysterious dice” and a “remote control”, and you can use these two items to move AI-chan. When AI-chan reaches the specified position on the board, you can get the reward for that square. By participating in the event, you can get rewards such as Chrono Traveler Shards and Star Stones.

—-
Ready for a new stage. Now is the time to appear!

A solid world view and story
A story of girls called "Valkyrie" who confront the unknown power "collapse".
Beautiful CG, animation, and the voices of gorgeous voice actors will produce a dramatic story.

Around 2000 BC, human civilization suddenly collapsed due to a natural disaster.
Even after that, due to periodic floods, people have repeatedly walked the history of building civilizations and then collapsing.
The long battle against "collapse" has exhausted the earth, and mutated "collapse beasts" have begun to appear around the world. Those who survived established the "Destiny Organization" to find a way to avoid destruction.
As a result, the existence of the "collapse phenomenon", in which organisms mutate and disappear, and the "stigmata", which possesses the power to oppose them, were confirmed.

Three years ago, the greatest disaster in the history of the collapse, known as the "Third Collapse Impact," fell on Choku City, the land of the Far East where Kiana Kaslana lives.
Kiana, who inherited the blood of the Kaslana family, which has a deep connection with the collapse, escaped the infection, but the damage was enormous and left a big scar on people's hearts.
Kiana, who lost her mother in the first battle and her father also disappeared, decided to confront the "collapse" and boarded the battleship Hyperion of the anti-collapse battle team "Valkyrie Unit".

◆ App price
App body: Basic play free
*Some paid items are available
Please be sure to check the terms of use before using.

◆Help/Contact
Questions on the review section and official Twitter cannot be answered individually.
If you have any opinions or requests about the game, please send them to the following e-mail address.

[Contents to be filled in when making an inquiry]
‣Your device name
‣Trouble Details
‣ Your numeric ID (you can find it in the comrades search section in the game)
‣If the crystal is not reflected, please send us a screenshot that includes your numeric ID, order number, and details.
‣Opinions and requests 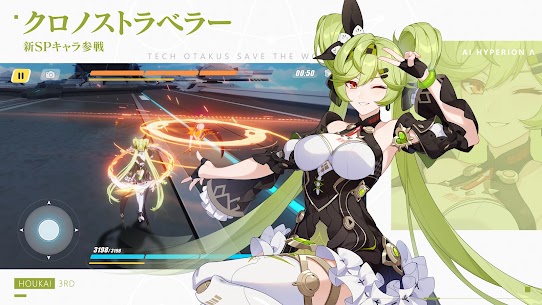