Unleash your inner pilot & CONQUER the skies! Airplane Flight Plane 3D is a avion simulator game which includes lots of fun collecting rings and following a specific path to land at your destination point. The airplane flight simulator game spiced with cool graphics, awesome game play, adventurous oceans, airports, airline commanders and modern aircrafts on the lap of tides making you feel real flying pilot. Doesn't matter if your are a kid, old or young you should get the airplane Real flight simulator game. You ca enjoy this real flight pilot simulator in your leisure time either your are travelling or lying on the bed. As airline commander it is time to gear up aeroplane and touch the high skys with passengers. Let’s become pro airplane pilot and take your airplane as high as you can.

You will be awarded pilot license so you can enjoy aeroplane flying 3d. Get a plane & go high. Guide & steer the airplane through all of the Rings to ensure you head to correct destination, going through all of the way points. You are even allow to go one direction or the other. In Airplane Fly 3D : Flight Plane, your role includes racing against time, control the airplane in the middle of the oceans, & land safely on an airport.

Unlike other flight simulator games our airplane game’s controls are easy and smooth. Be carefull while getting the passengers in real plane flight simulator although the plane is fully secured and there is no risk of danger but if if you strike the flying plane with ground it will burst and you have to play again airplane game. Anyone including the kids or big boys and girls can play Airplane Fly 3D : Flight Plane so get on-board and don't let the passengers wait for their pilot anymore. 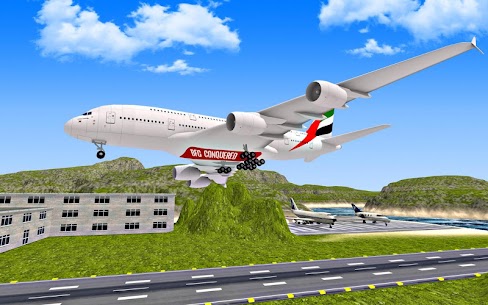