"With Dinosaur Master, kids will discover incredible facts about the most popular dinosaurs of the famous Jurassic Park & Jurassic World films, Camp Cretaceous, Path of Titans and Ark: Survival Evolved. Learn their sizes and lifestyles. Collect more than 100 dinosaurs of all ages (Cretaceous, Jurassic and Triassic), including pterosaurs and more than 365 facts.

With the minigames, kids can test their knowledge about dinosaur morphology, names, battle and hunting techniques. Fill up all this data in the encyclopedia and create a sort of dino zoo. You can find the most dangerous carnivore dinosaurs, the biggest herbivores and the rarest omnivores. Check facts and data about all Camp Cretaceous dinosaurs. Also you can learn more animals with the Ice Age expansion that includes animals from the paleogene, neogene and quaternary. Find giant creatures like the mammoth, the smilodon or megalotherium that got extinct only a few thousands of years ago.

Are you already an expert paleontologist? Can you get a 10 out of 10 in our quiz? This dinosaur game for kids is designed for different age groups. Minigames have different difficulties so that kids of all ages can have fun!

Learn how a paleontology expert or an archaeologist discovers new and rare dinosaurs from around the world. The game is permanently updated and new dinos are added every month. We will also be adding new Jurassic World 3 Dominion dinosaurs when they are announced. This way you can watch the movie and follow the story while learning scientific facts about dinosaur history.

All our illustrations in the encyclopedia are original and scientifically reconstructed from real dinosaur skeletons. The art of the game is diverse but always tries to depict dinosaurs as the most recent discoveries show them, with feathers, correct anatomy and other known attributes. The periods, such as the Cretaceous or the Triassic, are also reconstructed according to the vegetation and environments typical of the different phases of the Mesozoic. 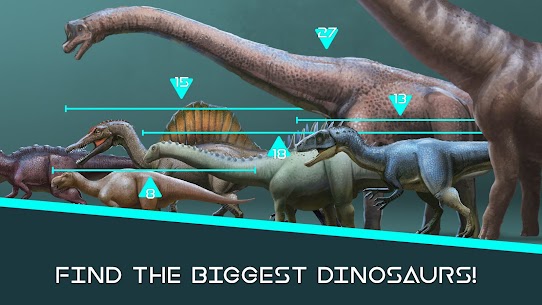