Play as and fight against characters from the Godzilla Omniverse in this 2D monster/kaiju action fighting game.

The game revolves around 2d giant monster combat. Engage in close quarter melee, grab attacks, or beam fights. Each character comes with their own unique set of special powers and abilities. All characters have a special "Fury" attack which serves as the most power ability of the character, which can be used to turn the tide of combat at any moment. Some stages include buildings which can act as hazards if monsters are thrown onto them, or if they collapse on top of them.

All monsters have a basic and heavy attack, and crouch and jump variant attacks to utilize against a foe.

. Reward Boxes now give more points/quartz and tied to skill level AND monster's rank.
. Input layout modified to include the fury/grab/team hud icons as exclusively for player's use. For default layout (layout A) these will be on the RIGHT HAND SIDE (where the AI hud for these three were before). AI's hud for these three is no longer visible.
. Google Play Services still a wip - works during testing but seemingly not when released so will require more testing. Can be enabled/disabled. 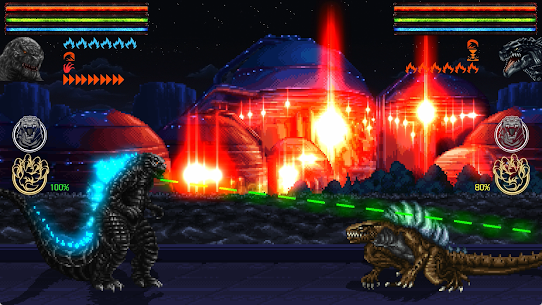