Klondike Solitaire is a classic card game, the meaning of which is to arrange a deck of 52 cards in order, starting from the ace and ending with the king.

Solitaire games free for everyone, both children and adults.

Rules of the game:

The game of solitaire "Klondike" involves one deck of cards that need to be laid out in 4 piles (they are called the base or home). Cards can be shifted one on top of another, with a higher rank (put five on six), but of a different color (red card can be put on black).

In each base, an ace is placed first, then a deuce, then a three, and so on until the king. Cards can be taken from the remaining deck, in a simple level of difficulty, one at a time, and in a difficult level, three at a time. Only kings can be placed on free cells (not in the base). The game is considered completed when all solitaire cards are laid out in bases.

Features of the card game "Klondike Classic" in English:

Two difficulty levels: 1 and 4 suits;
Vertical and horizontal screen orientation;
Possibility to cancel the move;
Can be played without internet connection;
You can play Klondike solitaire for free;
You can change the background color, pattern, card backs;
Ranking table of the best results;
Free card games for adults
The minimum number of ads.

Classic solitare is very similar to the one you played on your computer. We have kept all the style of this free card game. 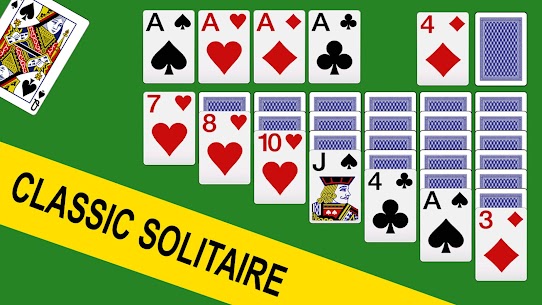