Discover a world where warships fight in sea battles! Realistic battleships war and exciting multiplayer game! Select the best warship and win!
Action army games and team battles are waiting for you!

Steer a legendary battle ship of yesteryear, use naval strategies and tactics of modern for warships and destroy enemy ships!
Lead exciting online multiplayer navy fights, play with friends against enemies and win epic battles against destroyers, cruisers, and battleship!
Arrange your sea battle against real players from all over the world in a dynamic sea shooter!

Steer a battleship of the First and Second World War and feel the tension of battles! Direct your fleet to glorious victory! What are you waiting for, captain?!

ONLINE PvP
Exciting PvP naval battles – command an attack teams of players from all over the world on warships. Prove that you are the best captain in this war game and your fleet is invincible.

VARIOUS SHIPS OF THE FIRST AND SECOND WORLD WARS
Lots of warships of your choice! From Aurora to Yamato!
Choose a fraction you like and fight back your opponent!

TACTICAL ADVANTAGE
Choose the warship that suits best your PvP style.
When placing ships, be sure to come up with new ideas, constantly change old concepts, use flexible tactics, and improve your strategy to successfully suppress the enemy!

DEVELOP AND IMPROVE YOUR FLEET
The upgrade systems allow you to create a unique fleet for a military sea shooter.
Improve the combat characteristics of warships, equipment, and weapons.
Use emblems, special torpedoes and consumables to change the course of the combat!

AWARDS AND TOURNAMENTS
Participate in weekly tournaments, win prizes and awards! Complete daily quests and challenges for even greater rewards!

Multiplayer military army games have never been so addicting! These are action games! There in the game a graphics of modern for warships! Ready for the naval battle?
War thunder is roaring! Give orders to your fleet! The warships have been fully armed already!
Modern warship game about legendary battleship! For fans of epic PvP war, multiplayer warship fight and everyone who loves action battle, military and naval shooters.
Online ships are waiting for you!

Good day, commanders! We have an update on board!
What's new:
• Improved target capturing near the island corners
• Improve the performance of the game and various bug fixes 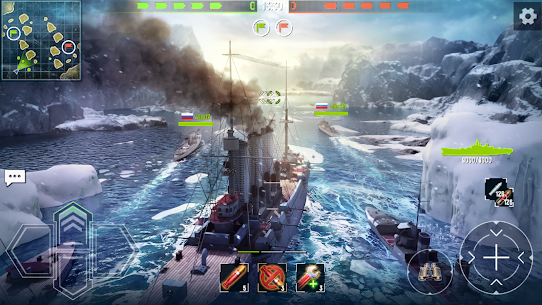