Claim glory for YOUR team as you take on the might of the World’s best Rugby League teams!

Showcasing all new player and stadium visuals, a completely redesigned team training system and, overall, a much richer gaming experience; Rugby League 22 is the only game that delivers the power, speed and intensity of one of the World’s most enthralling sports.

Also, for the first time, the Women’s game is fully represented – with complete parity to the Men’s game so you can enjoy the game equally no matter which option you choose.

Choose your favourite team from the national leagues of England or Australia or build your own custom team, train them up and dominate the leagues – as you build a team for the ages. Alternatively, take home the ultimate trophy in the Rugby League World Cup.

Regardless of what you play, one thing is for sure, this game will keep delivering your daily dose of Rugby League action for the weeks and months ahead.

WOMEN’S RUGBY
Women’s Rugby is one of the fastest growing team sports in the World so it’s clear that no Rugby game would be complete without inclusion of the women’s game.

NATIONAL LEAGUES
Take part in the English or Australian Leagues and crush the local opposition in style. Earn exclusive rewards including highly skilled International players to boost up your own team!

WORLD CUP ACTION
Starting in the group stages of the competition you take direct control of your team’s every move, where every pass and tackle has to be executed with precision in order to overcome the opposition. Progressing to the knock-out stages means an even higher level of concentration is required but every hard-fought try takes you closer to your goal of taking home the silverware.

BUILD YOUR OWN TEAM
Are you up to the challenge of building the World’s greatest Rugby League team? Collect and build a team of players that you can train up to take on the very best opposition. Design your kit, create your team name and upgrade your stadium to fill it to capacity with crowds of adoring Rugby League fans. Then, win the league to earn promotion and get ready to take on the next level of opposition. Can you become champions of the All Star league?

FEATURES
– Women’s Rugby is fully represented for the first time.
– All new player visuals for both male and female players.
– Beautiful stadium environments.
– Major improvements to game-play.
– Enhanced crowd rendering.
– Referee and linesmen.
– And, much much more!

IMPORTANT
This game is free-to-play but does include optional in-app purchases, which can be purchased with real money. 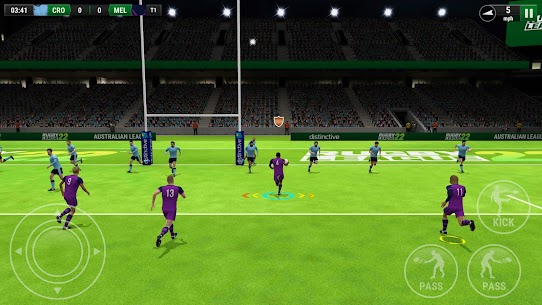