Spirit Beast of the East

Chi You broke seal and returned. He swore to rule the three realms and erase the stigma of defeat thousand years ago. The dark cloaked the three realms again.
You happened to travel into this world and became a beast tamer. You have to save the three realms and at the same time, save yourself.
Start with a bow, spirit beasts and goddesses are waiting for you.
Fight for the world, fight for yourself. Becoming the Immortal is your fate!
[Features]
Ancient Beast, Swallow to Transform
Perfectly reproduce the ancient world full of ancient beasts. Everything can be swallowed and generated. Baize, Mooneater, Kirin, Jade Hare and other beasts for you to select!

Rare Artifact, Easy to Get
Treasury platform shines under the boundless sky. A plenty of five-star artifacts to be collected and matched at your will.

Travel Through Seven Seas with Goddesses
Dozens of goddesses are waiting for a trip and battle with you. Fight for the mighty!

Ride the Thunder, Be the Saint
Refine Qi, Essence, Spirit in your own way, Immortal of tomorrow is no one but you!

Protect the Three Realms Against Chi You
The return of Chi You brings demons. Call on your exclusive spirit beast to guard the world! 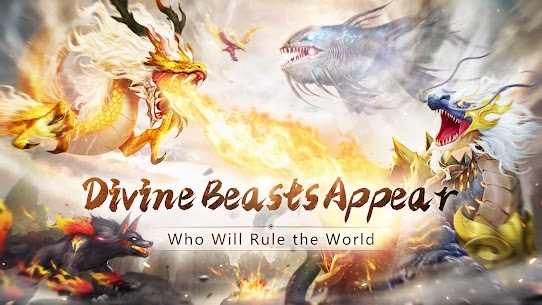