•This is a third-person battle royal shooter for mobile with advanced mechanics and possibility to play offline. The player needs to survive, while eliminating all enemy forces as in all applications from the section.
The game starts when player lands on a map, which contains a certain amount of vehicles, weapons and supplies. The player should move around an open area as well as find and fight enemies by using all possible methods.
The application has fairly high-quality graphics and comfortable managing. The game has a flexible system of settings that allows you to adjust the character to your preferences.

• Weapons. The game provides light and weapons. If necessary, the user can pump any rifle, machine gun, shotgun or pistol. To do this, you need to use the in-game currency;
• .Characters. As the players progress, they can unlock new characters. much skins are provided, which differ from each other not only in appearance, but also in physical abilities;
• Abilities After paying the money, the player can upgrade his character.

Offline Free survival Unknown Battle provides such regimes as:
• Battle Royale. 40 players land on the map, but only one must survive;
The game’s features
• A lot of weapons and characters;
• Ability to pump your skills;
• Comfortable managing;
• Good optimization;
• Beautiful graphics.

If you have had experience playing one of the free multiplayer mobile action games , so that in our game you will get acquainted with the new game features and modes.

As we evolve with the game, we encourage you to reach out to us, with your questions or inquiries, feel free to shoot us an email, or a message on our contacts. 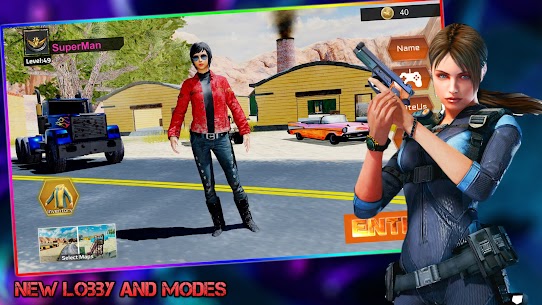