You have 54 blocks assembled into a tower. Players take turns to remove a block and place it on the top. Draw your block out with care, balance it accurately, and celebrate victory when your opponent knocks the tower over.


Game modes:
Multiplayer – build your tower with other real players on the net.
Turn-based on one device – hold your own tournaments with friends.
Against the Computer – test your skills in offline mode with an AI opponent. 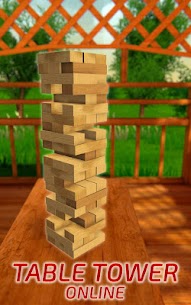