TallyUP! – The Game Show For Everyone

Start with some free money (thanks, sponsors!) then match wits with others in simple 1-minute games to multiply your winnings. Cashout via PayPal. At least 10% goes to charity.

[ PLAY & WIN FOR FREE ]
TallyUP! is a new kind of game show that is 100% free to play, enabling anyone to compete in fun, simple, and very fair games and win up to millions of dollars in real prize money!

Start by receiving a small amount of free, real money, which is paid for by our game show sponsors.

Then get matched against another player who also has some real money from sponsors, and compete in one of our simple 1-minute games to determine who wins the pot and continues climbing the Money Tower.

Games can be learned, played and won by anyone in just minutes.

Any time you lose, the system will provide some more free money to start over. Tries per day may be limited.

IMPORTANT: When you play, you are competing against other players and NOT against TallyUP. The app simply gives money to all players and lets them compete against one another. Any time you lose, it means another player has won. We have no incentive to rig anything and our goal is to give away the maximum amount of prize money possible (to players and charities). All of which is paid for by advertisers.

Unlike other games, in TallyUP there is NO WAY to spend or risk your own money. And there is no need or ability to spend money to win. Anyone can play and if you stick with it and practice, you might just win a significant amount of free money in the Game Show for Everyone.

[ FAIRNESS ]
Every player has a fair and equal chance at winning real cash prizes, and it is a matter of testing your minigame skills, outwitting your opponents and a bit of luck! Games have been designed to ensure that players are unable to cheat or get any unfair advantage. TallyUP is designed to ensure anyone and everyone has a fair shot of winning.

[ TYPES OF GAME PLAY ]
Face off with other players in short minigames to win their balance and climb up the Tower. These tiny games are cleverly designed minigames made to be simple, addictive and endlessly enjoyable by anyone with elements of bluffing, strategy, game theory and luck.

Play and match against other players for a thrilling live-game experience, or challenge your friends or rivals into a MatchUP and play at your own pace!

Practice and hone your mini game skills in Arcade mode, where you can face-off with other players and build up your minigame might!

[ CASHING OUT AND DONATING TO CHARITY ]
Once you reach a balance of $10 or more, you may cash out winnings via PayPal.

When you win and cash out, 10% of winnings go to charity. You may always choose to give more than 10% and make a bigger difference. Top donors are ranked on a leaderboard of TallyUP’s most generous players!

[ TEST YOUR CHOPS DURING THE SURGE! ]
Play and compete against the best players on Tuesday and Thursday evenings (6PM PDT- 7PM PDT) in an epic hour of high-stakes minigame madness which we call “The Surge”! Winners are celebrated publicly on the Tower and our social media with all the glory and bragging rights.

[ GET EXTRA CASH WITH SPINS AND MEGA SPINS ]
When starting a new climb (from zero balance), the Game Show allows you to spin a wheel to determine how much free money you will start with. Basic wheel spins ensure you will start with no less than 1c and up to 50c.

However, you can also earn Mega Spins, which give you access to a special wheel! Mega Spins let you win at least 50c and up to $20!

Earn 1 new Mega Spin (worth up to $20) for each friend you invite to TallyUP! And each of your invited friends will get a Mega Spin as well!

New in this update:
- New Tournaments in the Matchups Tab
- Bug Fixes and Performance Improvements 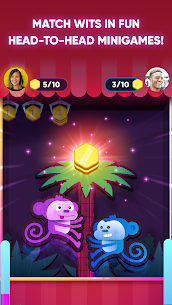