Get ready for the epic gang games! Become the leader of a mob, create your own crime style, recruit your mob members and fight with other gangs led by real players from all over the world. Be careful! You may find yourself under the fire in the middle of gang wars!

★ Are you ready to climb the ladder and rule the crime city? Get into street fights and become the best in the hood in these unique gangster games.
★ Team up with other mobsters, start your own gang and face enemy players in gang fights. Dominate your neighborhood and become the kingpin of the sin city!
★ Choose your character from a diverse line-up of mobsters and carve their path to the top. Compete in a bank heist to get extra money, earn respect in the game and strengthen your position in the gangster city!
★ A unique slots mechanic allows you to face the mobsters in a game of luck and skill, where the best crew will rule the gang city. Draw and match to hit the jackpot and rule over your rivals.
★ Create or join powerful street gangs and entice others to join: gather your allies and convince your enemies to double-cross their own gangs.
★ Strategize, plan, and devise your tactics together to dominate the hood games.
★ Send backup and help your homies! Become the best gangsta in the town and lord over your rivals in non-stop action.
★ Packed with exciting high-octane events, this game offers new challenges every week, keeping you and your crew on your toes.

LEAD YOUR OWN GANGSTER CREW
Are you ready to become the most fabulous gang leader? Make your own team and conquer the gangsta city. Add your homies to your crew to keep them close. Find and recruit talented mobsters from all corners of the underworld. Your friends need cash, weapons or ammo? Send them backup and raid the streets with your team.

DESTROY YOUR ENEMIES IN GANG WARS
The battle over the neighborhoods has begun! Become the greatest gang boss along with your squad. Take over the territories to get some points in gang battle and rule the entire street. Defend it from rivals and raid other turfs. Fight side by side with your friends in non-stop action. Take revenge on rivals who messed with your homies!

THUG LIFE OF A GANGSTER
See for yourself what the thug life of a real gangster looks like. The most important thing is to earn the respect of your gang members which is not an easy task. Become a grand gangster, fight other teams from all over the world and reach the top of your criminal career. Grab your rival’s money and use it for your advantage to strengthen the power of your crew.

COMPETE IN BANK ROBBERY CRIME
Take part in regular events to face other players in money heists. This is a unique opportunity to double amount of cash and level up your character extremely fast. Jump over your rivals and open the safe to win the grand prize!

Please note that although The Gang is a free to play game, our users are able to purchase virtual items with real money. If you don’t want to use this feature, please disable in-app purchases. 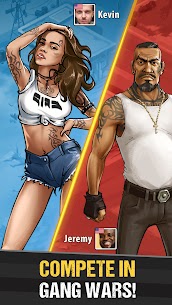