Hippo and her friends decided to have rest in the fresh air. Kids gathered at the clearing around the campfire and started telling each other fairy tales. It was Hippo's turn. And Hippo decided to retell the wonderful fairy tale – The Three Little Pigs. But to make the story more interesting, clever Hippo remade the tale so that the heroes of the story were her friends. And instead of the angry grey wolf was a large toy dinosaur! Louis, Archie, Dennis and Mark found themselves in an exciting adventure, where they could build a house and run away from a toy dinosaur. Join them! Hippo and her friends want you to take part in a fairy tale The Three Little Pigs. Help kids cope with cheerful tasks. Kids stories are waiting for you and your kid. Try to build a house from bricks, which could protect animals from a large toy dinosaur.

As you know, free games for kids and parents are renewed with an interesting interactive fairy tale The Three Little Pigs. Everybody likes to watch cartoons with favorite heroes and listen to exciting fairy tales. But today, you and your kid could become heroes of this funny story themselves. Like the heroes of a classical fairy tale, our friends are going to build a house out of straw and leaves, then from wooden planks and at the end of the hard bricks. And once friends finish building a house, it still needs to be painted in bright colors. But other than that our interactive fairy tale will have much more funny games for free. Fairytales are interesting themselves. But what would happen if, while listening to the story, the kid could play hide and seek with funny characters and throw the tomatoes at a toy dinosaur?

Try our free games for kids and their parents- it is much more interesting than just watch cartoons. In addition, they are also educational games that could be really useful. An interactive fairy tale The Three Little Pigs is waiting for you and your kid. Spend time with interest and benefit, playing our educational free games! 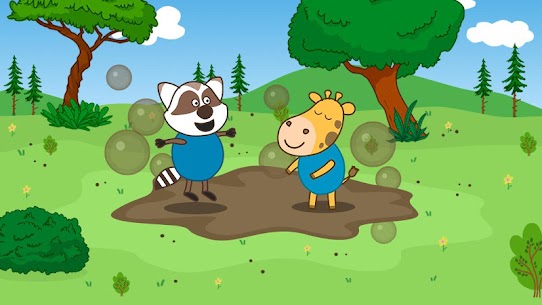