Weapon builder simulator is game that allow you to build and customize your favorite guns as you want! Contains many different camouflage, accessories such as optics, lasers, lights and much more! From the popular military assault rifles to the pistols, machine guns, sniper rifles with unlimited ammo, realistic gun sounds and functional attachments.

★★★ CUSTOM GUN BUILDER
If you are in love with guns as we are you'll experience an unforgettable experience! All weapons are completely customizable. Functional attachments make game so realistic. Our gun builder simulator have million build combinations, limit is your imagination! Build, save your arsenal and use it later again! Each gun upgrade makes your weapons to the absolute best! Get custom gun simulator now!

★★★ GUN SIMULATOR 💥 && GUN SOUND EFFECTS
Unlike most gun simulator 3D games, here you will experience realistic gunshot sounds. Weapon builder allows you to choose weapon you've build and start shooting. This gun game is an ideal option for you. This weapons app features realistic guns like AK-47, M16, Grenade, and many other. In the options you can choose how to shoot with your guns, select slow or normal motion, chose unlimited ammo or the normal number of bullets within magazine. It’s the same for vibrations and smoke effects. We have collected the best firearms in the world for our gun game. Enjoy stunning visual and sound effects! Start gun shooting!

We have developed the gun app offline for the interest of users, so you can play this gun simulator anywhere and anytime. Search no more for a gun simulator and unique gun builder app!

😁A ton of content awaits in our Weapon Builder Simulator.😁 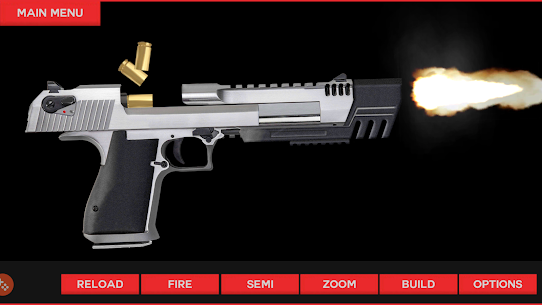