Wanna to talk with your pet? Wanna to say "woof" believing the dog hearing and understanding you?
Wanna to know the dog is thinking about? Don't know how a dog barking translate?
Talk to dogs on an equal using the Dog Translator Simulator app. This is the play, joke, fun and entertainment.

Use a phrasebook – translator from a doggie language to the human. Record the voice or choose the prepared phrase. The translator would revise the voice and play it in another language in jest.

Turn on the sounds for pet to understand what sounds he like or which should't to play. Choose from the sounds set you like. Сlick to play and await the pet reaction.

Try to speak with the dog or puppy using the features Dog Translator Simulator app.

Talk with the pets breaking the language barrier. Favorite pets may not understand the phrase, but they will hear familiar sounds and pay attention to you. Dog Translator Simulator app is the games to prank friends and loved ones plus play with the favorite pets.

Make like you talking to a pet. Its fun.

Read carefully! The Dog Translator Simulator app is a game, simulating the dog translator. The app is a joke and doesn't really translate from dog language to the human. Playback dog barking is the recorded sound samples. Dog Translator is the game by which you can fun friends and talk to the dogs and puppies. 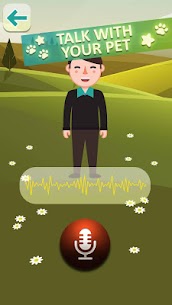