When dinosaurs meet science & technology, Dino Robots are created. ’T-Rex Brutal’ is the newest product produced by Dino Robot Factory, he is based on Tyrannosaurus rex, with his deadly jaw and powerful tail, he can easily destroy the enemies, come and try!

T-Rex Brutal: Dino Robot is an action packed robot building and robot fighting game where you can assemble your dinosaur from parts in three unique ways, and fight your components to become the T-Rex Brutal battle hero. If you like Robots, Dinosaurs or Mechs you will love this game!

MINI-GAME TUTORIAL
» Frontline Defence: Alien monsters are invading our homeland. You! Robot Master, prepare your troops, defend our homeland with three robots.
» Shoot Training: Here we present you a training mission, there are six moving targets in this mission, shoot them with your technological machine gun, try to score more in 60 seconds.
» Sky Shooting: This time enemies are coming from sky, don’t let them pass through, fight with air-fighter form, destroy as many as you can. 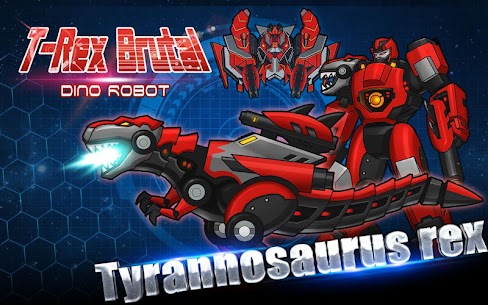