Restore glory to the Nine Realms as you fight in an endless Ragnarok! Join forces with the goddess Freya to recover sacred relics stolen by Loki and scattered across the realms in this epic incremental clicker game.

The battle to end all battles has left Asgard in ruins. Rebuild your defences by unlocking rooms to generate iron. Upgrade your rooms to increase production and rise through the halls of the Gods. Battle in Ragnarok again and again to reset progress, boost productivity, and conquer faster than ever!

Collect legendary Champions and tap to defend your rooms against invasion by mythical foes. Win XP to level up your Champions, maximise their stats and make them even more powerful. Take down powerful bosses then journey across the Bifrost bridge to expand across the Nine Realms!

Features:
• Unlock and upgrade rooms to generate stacks of coins
• Progress through the Nine Realms in this humorous take on Norse mythology
• Earn idle currency even while offline
• Daily login rewards and over 40 missions
• Collect legendary characters to defend the realm against enemy hordes
• Battle rivals in PvP to earn points and rank on the global leaderboard
• Prestige to reset your world by triggering an evolving Ragnarok!
• Ragnarok and roll to an original Viking rock soundtrack

Thank you for playing our game!
Your support has been so encouraging!
We've been happily fixing bugs for this update. 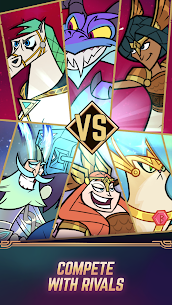